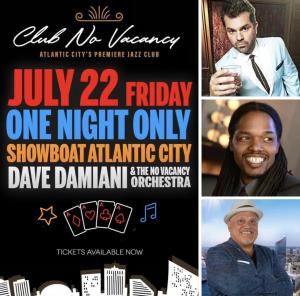 THE SHOWBOAT HOTEL in Atlantic City, NJ is thrilled to present AMERICA’S GOT TALENT WINNER – Landau Murphy Jr – w/ Dave Damiani & The No Vacancy Orchestra.  This special evening will include special guest(s) from America’s Got Talent and American Idol.  With a blessing from Frank Sinatra Enterprises Landau, Dave and special guest(s) will perform hits with a live orchestra from artists such as Frank Sinatra, Dean Martin, Peggy Lee, Frankie Valli, James Ingram, and George Benson, and many more.

Tickets are priced from $35 and are available now on EVENTBRITE:

Landau Eugene Murphy Jr. is the soul-and-Sinatra singing sensation who first rose to national attention as the season six winner of NBC TV’s “America’s Got Talent”. His debut album “That’s Life” spent several weeks atop the Billboard Jazz charts and in the Top 40 overall.  He has since released three additional well-received albums (two with Grammy-winning producers), penned an Amazon #1 best-selling memoir, appeared on several network TV shows, had a featured role in a film, was nominated for an NAACP Image Award, and named one of the Top Outstanding Young Americans by the United States Jaycees and has toured around the world, performing hundreds of sold-out concerts. For additional information visit, Landau Eugene Murphy Jr | Winner of America’s Got Talent (landaumurphyjr.com)

The SHOWBOAT HOTEL is located at 801 Boardwalk in Atlantic City, NJ 08401.  There is valet and self-parking available.  There will be cocktails available at the show.  For additional information visit www.davedamiani.com.

The rising singer/songwriter and West Virginia native was signed earlier this year by PCG Artist Development in Nashville and Allen Artists, a division of Allen Media Strategies in Washington, DC, for career representation.

Author Roger Smith On Becoming Free From The Fear Of Failure

The Fear of Failure is one of the most common restraints that holds people back from pursuing great ideas. Imagine if we could become totally free from the fear of failure. Imagine what we could then manifest and create. In this interview series, we are talking to leaders who can share stories and insights from their experience about “Becoming Free From the Fear of Failure.” As a part of this series, I had the distinct pleasure of interviewing Roger Smith…