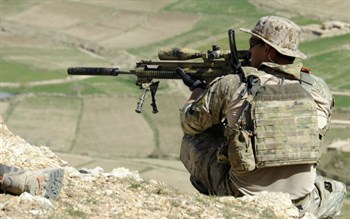 A decorated former Green Beret has dedicated himself and a team of “heroes” to seeing that service members successfully reintegrate into American society after returning from Syria and Afghanistan.

Having been deployed three times to Iraq, Jason Van Camp has become acquainted to life in a war zone. While involved in numerous firefights against the enemy, he witnessed one team member killed in combat and several others wounded.

“My Special Forces team and I have gone through quite a bit,” the former U.S. Army soldier confesses to OneNewsNow.

Van Camp says he has always been intrigued about how differently soldiers process their return and reintegration back into society after serving in a war zone.

“We’ve all seen the same stuff, but some guys have a really hard time with it and some guys don’t,” he observes, then asks: “[But] why does one guy struggle, and another have no issues?”

The three-time Bronze Star recipient admits he falls somewhere in the middle. He is grateful that he’s never been overly distraught — but at the same time, he realizes he’s not the same person he was before he left.

“You can’t ever truly come home again,” Van Camp states, echoing a popular axiom shared among war veterans. “It’s not because your home has changed; it’s because you have.”

He describes his return after his second deployment as “hard” and “weird,” but that it allowed him to solidify that he was, indeed, a “changed person.” On the one hand, he wanted to go back to combat — but on the other, he didn’t.

“I felt like I had a much bigger purpose when I was in combat,” he shares. “I was actually helping people live — saving lives, serving other people.” And the opportunities were plentiful, he adds. But when he returned from combat, he felt like he went from “running a marathon at full sprint to jogging just a slow mile around the track.”

At such times, Van Camp believes a soldier must remember he’s not alone.

“One of the first things you learn in the military is that you’re not alone … you’re not an individual,” he says. “[In fact], you can be part of an entire team of people who have often gone through the same things you have gone through.”

And while support from others is essential in dealing with related struggles, he contends that “if any person — soldier or not — could somehow put his attention on others and shift away from his own struggles, I think he’ll find that it’s an easier way to thrive and survive.”

That’s why upon retiring from the military, Van Camp started a company called Mission Six Zero and surrounded himself with strong leaders — whom he refers to as “heroes.” Together, they put together Deliberate Discomfort,  a leadership book designed for businesses but also a self-improvement book for individuals.

His team’s work focuses on how U.S. Special Operations Forces “overcome fear and dare to win by getting comfortable being uncomfortable” — a mindset he says has to be practiced.

“Discomfort does not need to be negative; it can be a positive thing,” Van Camp stresses.

“For a person to thrive in society — like the one even returning from the world’s war zones — he often has to commit to change,” the author maintains. That person has to be willing to get out of their “safe space,” he adds, and be willing to “confront whatever it is they are afraid of or struggling with.”

While that challenge can be uncomfortable, Van Camp believes it is important to accept the challenge — even when “it may feel miserable.”

“Misery,” he shares, “is suffering without a purpose, while suffering is what we do with a purpose.”

The Army veteran is hopeful the soldiers returning from Syria and Afghanistan find a supportive team and are able to find hope and success in processing their own return and reintegration into society.