Danehy opted for the lump sum option, cashing out with $650,000 after taxes, which is the same option he chose two years ago when he won the first time. The state lottery reported that he planned to use the winnings to purchase a car, according to WBZ-TV.

Both the winning tickets were purchased from the same Bell Food Mart location in Billerica, and the store will for the second time receive a $10,000 bonus for selling the $1 million winning ticket.

But Danehy is far from achieving the record for most times winning the lottery. Florida resident Richard Lustig has won his state’s lottery game grand prize a whopping seven times. He believes winning is more about research than luck.

“Luck has absolutely nothing to do with it,” he said. “How can anybody in their right mind say this guy’s won seven times he’s just a lucky guy? Come on. Nobody can be that lucky,” he told WKMG in 2012.

Lustig isn’t sure of the exact total of his winnings combined, but said it was in the millions. For those wishing to follow in his footsteps, he wrote a book with more tips for winning the lottery called “Learn How to Increase Your Chances of Winning the Lottery.” 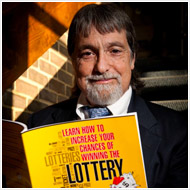