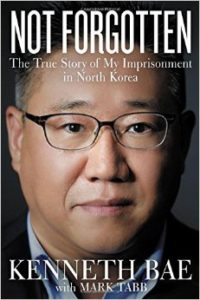 Not Forgotten: The True Story of My Imprisonment in North Korea

Kenneth Bae, the former American missionary who was falsely convicted by North Korea on charges of planning to overthrow the their government, visited Capitol Hill on May 10th with the help of Allen Media Strategies. Bae was in Washington to meet in person for the first time with Congressman Charlie Rangel, who was instrumental in orchestrating his release. Bae was held captive beginning In April 2013, when he was sentenced to 15 years hard labor in North Korea, despite suffering from several serious medical conditions. After an enormous international outcry for his release from everyone from the White House to Dennis Rodman, Bae was set free on November 8, 2014. He details his harrowing but ultimately uplifting story in his new book Not Forgotten: The True Story of My Imprisonment in North Korea from W Publishing Group, a division of HarperCollins.

While on Capitol Hill, Bae participated in a panel briefing on the secretive North Korean government and his treatment while held captive there, and also met with North Korea intelligence expert Ambassador Joseph DeTrani, the President of the Intelligence and National Security Alliance (INSA). DeTrani was the National Intelligence Manager for Counter proliferation (CP) and the North Korea Mission Manager. Ambassador DeTrani has also worked at the Department of State as both the Special Envoy for Negotiations with North Korea and as the U.S. Representative to the Korea Energy Development Corporation. DeTrani was also the CIA’s Director of East Asia Operations.

The Allen Media Strategies team helped oversee Bae’s extensive media interviews and coverage that day with a variety of domestic and international outlets, including Voice Of America, the BBC, ABC News, the Washington Times, Associated Press, NHK Japan and YTN, the 24-hour South Korean news channel. Bae wrapped up his day speaking with parishioners at a Northern Virginia church about how faith helped him through his ordeal.

Allen Media Strategies CEO Burke Allen said “Kenneth was incredibly humble and kind to our team and all he interacted with. I hope we were able to make his trip to Washington as smooth and easy as possible, and our team was grateful for the opportunity to work in conjunction with our partners at the W Publishing Group to assist with the day.”