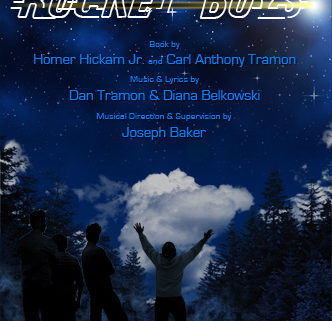 The exciting story of Homer Hickam and the Rocket Boys of Camp Coalwood will land on Theatre West Virginia’s stage at Cliffside Amphitheatre at Grandview near Beckley for the fourth time.

Based on the beloved New York Times’ #1 best-seller by Homer Hickam, theatre-goers will be transported to Coalwood, circa 1957, with the help of the cast of Rocket Boys The Musical. In Theatre West Virginia’s continued effort for diverse casts, African-American actress Rhayne Thomas will play Elsie Hickam. Homer Hickam was so delighted with the selection of Rhayne to play his mom that he sent Ms. Thomas a piece of Elsie’s jewelry to wear during the run of the show.

While Rocket Boys The Musical was scheduled to open Wednesday, July 18, the technicians managing the pyrotechnic effects wanted a few more days to make sure they have things right. Theatre West Virginia general manager Scott Hill said; “We want to make absolutely certain that the rocket launches and other special effects in the show function properly. The safety of our cast, crew, and audience are our number-one concern.”

The first one hundred people attending Friday’s opening night performance will receive a Rocket Boys The Musical poster autographed by Homer Hickam. Mr. Hickam will be in attendance for Friday night’s performance to greet fans of the play, his New York Times #1 best-selling book Rocket Boysand the movie about his life October Sky.

This fan favorite will make its way to Theatre West Virginia’s 1,260 seat Cliffside Amphitheatre at Grandview in the New River Gorge National River outside Beckley, W. Va. beginning Friday, July 20. With only three show dates available including July 20, 21 and 22, performances begin nightly at 7:30 p.m. Tickets are available by visiting the Theatre West Virginia Online Box Office or by calling 304-256-6800.