The author, John Chryssavgis, is the theological advisor to the 270th Patriarch of the Ancient and Glorious See of Constantinople, also known as the Orthodox Church of Constantinople. The book is written in an easy-to-read and easy-to-understand style.

We find soon that the author is an admirer of Bartholomew’s. He eloquently and in many ways describes the patriarch’s dedication and unique style of managing the Orthodox Church’s affairs. Above all, he credits Bartholomew with the revitalization of the Orthodox Church, a church that had declined into obscurity. 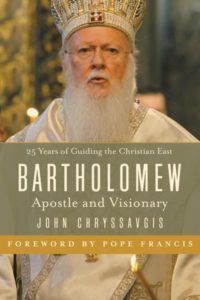 As the author writes, “Some suggested that the ecumenical throne is at best a historical anomaly, the last faint survival of Byzantine glories, and that it would make more sense to let go, once for all, of the fiction of a special status for the patriarch.”

In the early years of Christianity, the catholic church was undivided. However,   interpretational differences gradually led to a serious schism, leading in 1054 to a complete separation of the church into two, often hostile, churches, the eastern orthodox Church of Constantinople and the Church of Rome.

Over time, the orthodox Church of Constantinople located in an Islamic country and representing mainly troubled Eastern Europe and Russia fell into obscurity as the Church of Rome gained international recognition and global importance.

With the enthronement of Patriarch Bartholomew on November 2, 1991, the situation changed. The Patriarch was resolved to lift his church of some 300 million Orthodox Christians scattered all over the globe from obscurity back into prominence.

He went about repairing relations with Rome by establishing close brotherly relations with Pope Francis. While the Patriarch was visiting Rome, Pope Francis proclaimed: “I consider it to be both a grace and privilege to walk together with Patriarch Bartholomew in the hope of serving our one Lord Jesus Christ.”

Opening a dialog with the Muslim world, Bartholomew went to Qatar in 2012, attending a conference at the university of Qatar on relations between Christians and Muslims. Despite Turkey being an overwhelmingly Muslim country, he once said, “As citizens of Turkey, we have the sacred obligation to care with all our might for our country’s society and for the community of nations.”

We learn from the book that Patriarch Bartholomew comes from a simple background. His grandfather was a carpenter and basket weaver. His father operated the village café and also served as the local barber.

Bartholomew’s simple background seems fitting to his leadership style. As the author writes, the Patriarch’s “leadership thrives from poverty and its authority from humility. His leadership does not lie in power but rather in sacrifice.” 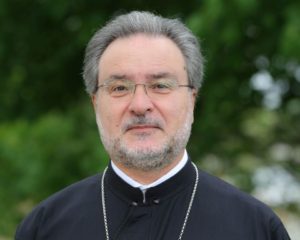 To further dialogue and bridge building, Bartholomew was convinced that the ecumenical Orthodoxy needed to disabuse itself from idolatry of parochialism and nationalism. To achieve that goal, he wanted to convene “The Holy and Great Council” of the globally scattered and from each other virtually isolated orthodox churches.

That all-important gathering took place at the Academy of Crete in Kolymbari on June 16 – 26, 2016.

Through the fascinating story of Patriarch Bartholomew’s life, the author displays how through dedication, tolerance, and the God-given gift of administration and leadership the Patriarch succeeded in ending the Orthodox Church’s 12 centuries of isolation.

Perhaps the author’s most valuable contribution is that through the life of Patriarch Bartholomew he shows the reader that religion can contribute to the creation of a society and culture of solidarity.

Read this oped and more from author and AMS client Nasir Shansab: www.nasirshansab.com